Today, associate director of Ecumenical Affairs for the Archdiocese of Boston Vito Nicastro shares the significant of the issuing of Thursday’s joint letter between the Catholic archbishop and the Greek Orthodox metropolitan of Boston. 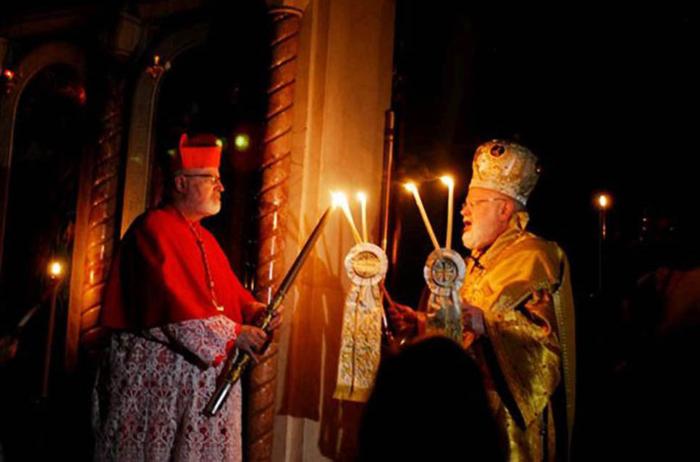 Above, Cardinal O’Malley joins Metropolitan Methodios at the Cathedral of the Annunciation for the Greek Orthodox celebration of the Easter Vigil April 19. Photo courtesy Alexander Mavradis

The reason why each and every one of us as Christians needs to play a part in the work for Christian unity is rooted in fidelity: Fidelity to the Church, to the Gospel, and to the Lord. That is why the Holy Father Pope Francis is going to meet Ecumenical Patriarch Bartholomew and other Christian leaders May 24-26. It is also why Cardinal Seán with Metropolitan Methodios of the Greek Orthodox Metropolis of Boston issued a joint letter to their clergy and faithful on May 21.

Vatican II taught us that Christian unity was one of its principal aims; that “The attainment of union is the concern of the whole Church, faithful and shepherds alike;” and that the work “extends to everyone, according to his or her talent” (Decree on Ecumenism, 1 and 5). Just like in evangelization, the Church has no superfluous personnel.

And the link between ecumenism and evangelization is fundamental. “Discord among Christians is the greatest obstacle to evangelization,” said the Holy Father in March. And Jesus’ dying wish for us was that we all be one (John 17:21) “so that the world may believe.” If we are evangelizers, one of our goals each day should be to make some mark for Christian unity.

How do we do that? Everyone can pray for it. Everyone can offer it silently at the intentions of Mass – in general and in particular ways. Everyone can strive for greater personal holiness – drawing closer to the meeting point of all Christians, Jesus. Everyone can examine himself or herself for over-generalizing about other Christians.

They say, “Blood is thicker than water.” But what if the blood is the blood of the Cross and the water is the water of Holy Baptism? Then both form a bond which eternally connects all Christians into a family. We can all hold our thoughts, words, and actions to the standard of utmost charity towards our brothers and sisters. All of us can learn more about them. All of us can build relationships. All of us can see the world differently in light of this bond.

There is much more we can do to make a difference. The Church has given us guidance and exhortation, and providence has given us the circumstances in our city and in our lives to make the unity – albeit incomplete and imperfect–which we already share a living reality. In our region, one of the greatest opportunities for this is the presence of a wide range of Christian communities from all over the world, including the Greek Orthodox. Their Metropolis (like an archdiocese) is led by His Eminence, Metropolitan Methodios. Together, the cardinal and metropolitan – building on their predecessors – are continuing to actualize on the ground the intentions of the Holy Father and other Christian leaders to work toward unity.

That’s what the joint letter of May 21 is about. It is a fruit of the realization on the local level of the progress made so far towards completing the remarkable unity we Orthodox and Catholics already share. The letter is rare – something that happens perhaps once or twice a decade. It is significant in the way it links what we do with the Holy Father’s trip and all that our Churches have done building up to it. It is yet another manifestation of communion between our local Church and the Church of Rome – and communion is what it’s all about in the quest for complete Christian unity.

The joint letter describes a little bit of our relationship between the metropolis and the archdiocese. There is much more than one short letter could contain. At midnight on this past Easter Eve at the Cathedral of the Metropolis the metropolitan gathered with his clergy and faithful for the Easter Vigil. With the church nearly dark and all holding unlit candles, the cardinal arrived from having concluded the Easter Vigil in our cathedral. The metropolitan gave him the Gospel to read, and together they proclaimed the Resurrection as light passed from candle to candle symbolizing the life of Christ which we all share.

*First published on The Boston Pilot, republished with permission