This year, we sought to make the Week of Prayer for Christian Unity truly reflective of the denominational and ethnic diversity within Boston’s Christian community.

By God’s grace, this happened! The anchor event on Saturday, January 21st had 22 co-sponsoring churches and institutions, drew together over 800 people, and has been called the largest and broadest gathering for Christian unity in Boston ever.

The concluding line in the gospel reading for that day was “We have seen incredible things today.” Indeed, God did great things in our hearts as we lifted up Jesus together, both on Saturday and throughout the week of nightly prayer gatherings. But, don’t take my word for it! Check out the photos and testimonies below to celebrate what God has done! 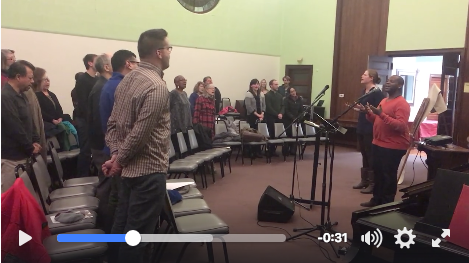 Wed Jan 21: Video of singing “Amazing Grace” together at River of Life Church 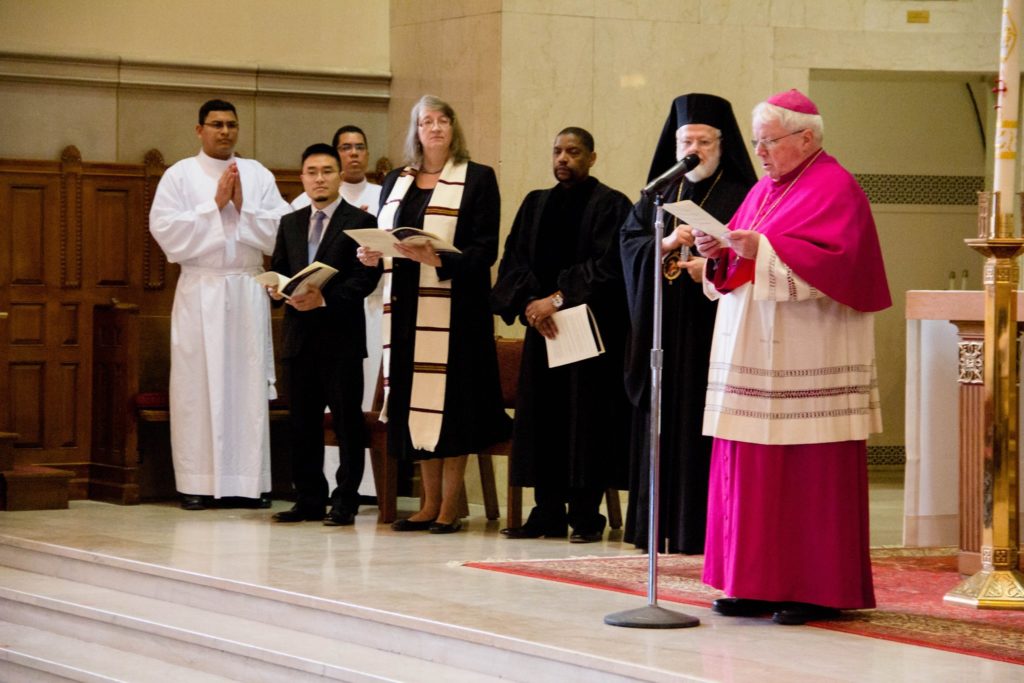 “I would like to express my gratitude to all who contributed a piece to the rich mosaic-experience we all enjoyed on January 21st. It is one of the stand-out Week of Prayer for Christian Unity events in my 35 years of ministry devoted to the cause. All who gathered around tables for both food and faith-sharing, who in church joined their hearts and voices in prayer, young and old, black, white and brown, robed in various styles—all, together, represented a microcosm of the human family and gave us a glimpse of God’s dream for us: reconciled to God and to one another. Jesus must have had a joyful smile on his face!”
-Fr. Tom Ryan, Paulist North American Office for Ecumenical and Interfaith Relations

“What a great privilege and delight to worship the One True God together in the unique forms of each branch of the Christian Church. It was incredible to experience our agreement in who God is and who we are. I’m especially thankful for the Cardinal, his leaders, and the leadership of the Orthodox church, for their humility and at the depth of their willingness to come together.”
-Ellen Bass, Black Ministerial Alliance

“Saturday’s event was honestly the most powerful event I have ever attended. It was incredible to have in one room members of the Catholic Church, the Protestant Church, and the Orthodox Church gathered together to worship and praise our Lord, our Father. During the prayer service I was incredibly moved by the word “OUR”. And when at the end, we all said the Lord’s Prayer in ONE voice I was awestruck by the most powerful recitation of the prayer I’ve ever heard. This is the way it ought to be. We are weak divided, but together we stand strong in Jesus Christ.”

“What an amazing witness this was of the variety and Christ-centered unity found in the Body of Christ!”
-Edouard Pichette, OneUnited

“This was the most impressive ecumenical event I have ever been to.  The Holy Spirit was clearly at work in this event.”

“Thy Kingdom come, Thy will be done…” On Saturday, all of us present at Holy Name witnessed a portion of God’s will done in the City of Boston. An undertaking such as this requires an immense amount of hard work and effort that can only be achieved with the help of the Holy Spirit. Thank you all who made this happen, and may God’s Grace continue to bless all involved, and our city, til Kingdom come.
-Steven Hardy, UniteBoston Rep and member of St. Paul’s Parish, Harvard Square
“On January 21st, the Body of Christ in Boston got a glimpse of itself for the first time in its entirety.”
– Dr. Vito Nicastro, Associate Director of the Archdiocese of Boston’s Office of Interreligious and Ecumenical Affairs
“When my mother walked into the church she was amazed. It was at the moment of the entrance procession when all the various Christian groups came one after another to be together and worship that she began to cry. She said, ‘This is what Christ wants.’ It was very moving.”
-Natalia Pellicano, Office for Ethnic Apostolates, RCAB
“God wants this Church to be one… and to see that expressed so beautifully here, that’s really fun. It’s different tastes and different flavors, and you start to realize folks love Jesus in ways that you don’t appreciate until you see them and get to connect with them. You see that people are really different, and yet their hearts are coming from a love of the Lord that’s really neat to see.”
– Jeff Bass, Executive Director, Emmanuel Gospel Center
“It was incredible, wonderful to see so many different Christians together and the music… I was crying. The Holy Spirit was there.”
– Lorna DesRoses, Director of Black Catholic Ministries
“I’ve always felt the importance of Ecumenism. I’m a very strong Greek Orthodox Christian, but I went to Catholic schools and I’ve had very strong friendships, relationships with Catholic Christians, and they’ve just given me so much support in my faith. I just love the coming together of people of different Christian denominations, and I feel so excited about progress in Ecumenism. I feel like we’re getting closer.”
– Maria Makredes

It was a very moving experience.  It was so inspiring also to see the church so completely filled… Holy Name Church was such a beautiful venue for the gathering.  We are so grateful to [those] who worked  so hard with so many different groups to bring this very important celebration together. It was astounding.
— Cardinal Sean O’Malley, OFM Cap, Roman Catholic Archbishop of Boston

“What brings us all here really is Christ, and that’s what the point of Christian unity is. If Christ says we should all be one, we should see that, and frankly the world doesn’t feel like that today. I’ve grown more in my faith, and I feel like as a young person I especially have the obligation and responsibility of witnessing to my vocation as the member of the body of Christ.”
– James Kelley, St. Joseph Parish, Roman Catholic, Needham

“I loved the prayer service- beautiful diversity and beautiful unity – that was the greatest part for me, was worshiping together with my fellow Christians. It was very moving. To hear the Greek Orthodox chant, and the Pentecostal choir, and the Cardinal’s homily. Thank you for doing this!” — Craig Dyke, Director, Family Life Office, RCAB

“We can be too preoccupied with the “doing”- what are we going to do together, the Martha part- and we forget the “being,” who and what we are called to be together, the Mary part. We forget that for God, the goal is not something we have to do. He came to form a people for His own. Jesus prayed that we be one as He and the Father are one– that is the witness, that is part of how the world comes to believe. That witness – especially these days, that witness is important for the world. That’s what we increased on January 21st.”
-Deacon John Koza, Holy Name Parish

How was your faith in Christ impacted by worshipping at churches throughout the city? We’d love to hear from you – Click on this link to fill out a short survey!